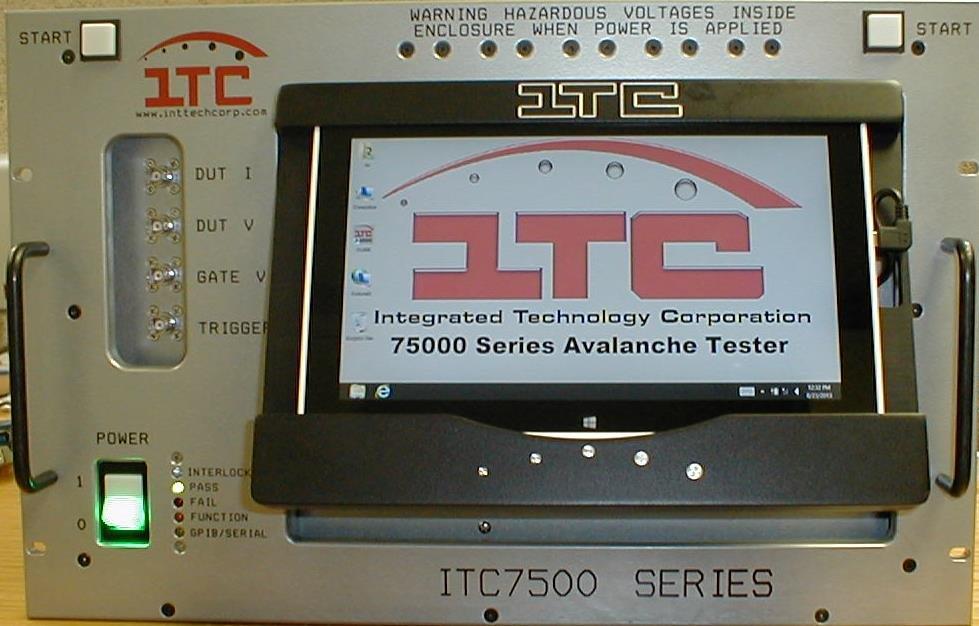 The ITC75300 is a 400 amp version of the ITC75100 which performs ruggedness testing of power MOSFET’s, IGBT’s and diodes that conforms to MIL-STD-750 method 3470 by stressing them to controlled energy levels, accomplished by the devices driving an unclamped inductive load. Improved Test Specifications allow complete control of test parameters.

Included as standard in the ITC75300 are an internal parallel energy path (crowbar) and an external gate drive and voltage measurement POD.

The crowbar can be set to trigger in the event of a device under test (DUT) going into avalanche fail. If the crowbar fires then all the remaining energy will pass through the parallel energy path and not into the DUT. In a package test this prevents the die being completely destroyed so that failure analysis can be performed and protects the handler or socket contacts from being damaged. In a wafer probe application it limits the damage to the die so that there is no debris scattered across the wafer and it protects the probe card. This same crowbar can be utilitized as a driver to reduce DUT current pulse-widths to minimize high current stress on DUT fixtures and handler contacts.

The POD is designed to be installed very close to the DUT. It contains a local gate drive with a total swing of 30V that can be set to 20V to turn a N-Channel DUT on and a negative voltage to hold the DUT in the off condition. The POD also has a kelvin sense line for accurate measurement of voltage. This capability allows additional measurements to be taken during and after the avalanche test. These include Rdson, Vdson and Vf measurements. All connections from the POD to the DUT are verified with Kelvin resistance measurements.